Special Olympics was created by Eunice Shriver Kennedy in 1968 when she noticed the need for a place where children with intellectual disabilities could play. Her vision took off and now the Special Olympics are widely recognized across the world. On April 18, Uplift fielded the first network-wide Special Olympics at Lumpkins Stadium in Waxahachie, Texas. 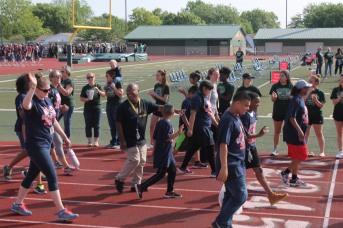 “This gave an opportunity for all scholars to show their skills and be a part of this with other scholars who participate as well,” said Amanda Luccitti, Uplift Triumph Special Education teacher.

With more than 250 athletes from across the districts filling up Lumpkins Stadium, 16 Uplift athletes competed in the Olympics games against schools from all over the district. Games included bocce and track and field among other fun activities.

“Since this is our first year, they are excited and having fun with the new experience which gives something for our younger scholars to look forward to,” said Luccitti.

Scholars have been preparing for this event by learning social and life skills. Being our first year, teachers and scholars worked hand in hand to prepare for the games. The excitement and enthusiasm was seen throughout the whole day at Lumpkins Stadium.

“I enjoy watching the kids participate and see them gain confidence as they compete in different competitions. Since we arrived at Special Olympics, I can see my daughter’s 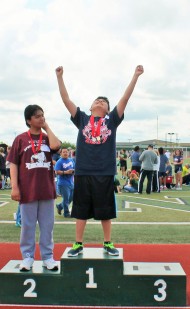 happiness and I am happy we are here too,” said Leticia Cantu, Uplift Peak parent.

It was a great day for Uplift scholars who took home a total of 26 metals. Staff and family cheered on all athletes from across the network.

“The Special Olympics event is motivation for scholars, and it makes them feel secure about themselves. Today is about them and they are the reason for all of us to be here,” said Daniel Cantu, Uplift Triumph parent

Our scholars took Special Olympics by storm and cannot wait to return next year!

This site uses Akismet to reduce spam. Learn how your comment data is processed.

Welcome to our Blog!

Uplift Voices is the blogging source for Uplift Education. Here you'll find news and stories straight from the people who make up Uplift's dedicated teams of faculty, staff and leaders!